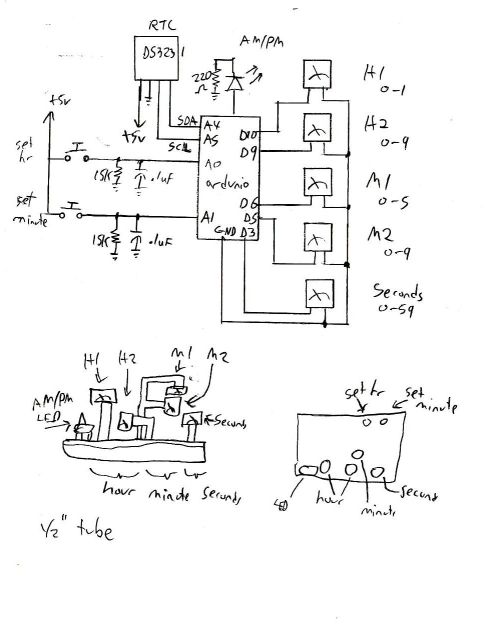 I was looking for something to do with this Ardunio Nano that I had gotten. So I decided to create a clock in a steampunk style with copper and analog gauges.   Four gauges represent a single digit each in HH:MM time.  A fifth gauge represnts the seconds and will have a scale of 0-59 seconds.  An LED light will be on for PM and off for AM.  Ardunio's are simple microcontrollers.  They are full pledged CPU's like in a laptop or desktop computer.   As such, they have no internal clock from which to be able to read the current time.   So I used a separate real time chip so the program can get the correct time.

Here is the intial prototype.  Originally I was only going to have just the hours and minutes.   Later I decided to add the seconds so you could see the clock doing something.  The meters a really all 5 volts.   The program takes a digit and divides to calculate the voltage needed to postion the needle appropriately.  The actual label in the meters will be replaced later with the new scales. For instance for a 0 - 9 then for a 9 you want the needle at the max far right, 5 volts.   For a five the needle should be in the middle.  So that's 2.5 volts. 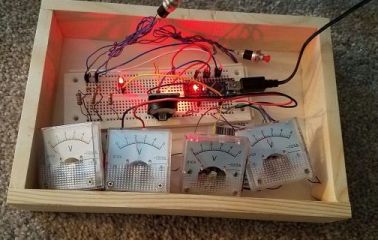 I created a template for the square boxes for the meters
with a piece of paper.  Then I took a sheet of copper
and cut them out using a dremel. I bought the sheet from
Amazon but found out later Home Depot  has small sheets
of copper. 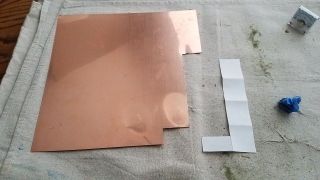 Then I used some pliers to fold each one into a box.  Five
were needed. I had decided on the layout by this time and drilled
the holes for the wires before bending it into a box because it was
easier to drill before hand. 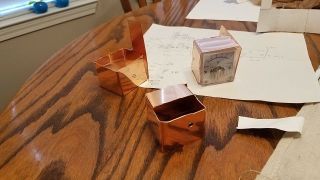 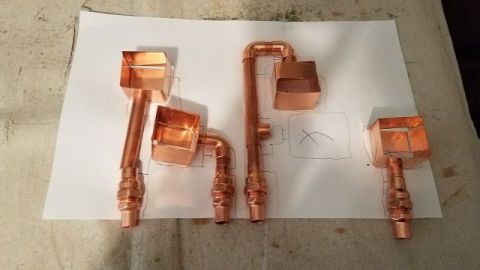 Laying out the parts let me get an idea where everything will go and how high I wanted the boxes.  Then I cut some copper pipe and started gluing some things together.


Here is the begining of the final clock. Notice the seconds meter has a new label so it has a scale in seconds instead of 0-5 volts. 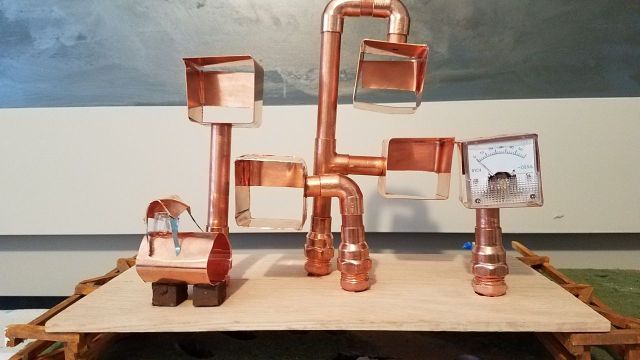 Here's the final clock. (Well semi-final. I plan to add some other pipes and odds and ends later on just for decoration.) Notice that the threaded copper peices at the bottom are gone.  I decided things were going to be a little too high.  And I couldn't use them top fasten things from underneath because I needed room in the box for the electronics and wiring. In the end I just glued them directly to the top. 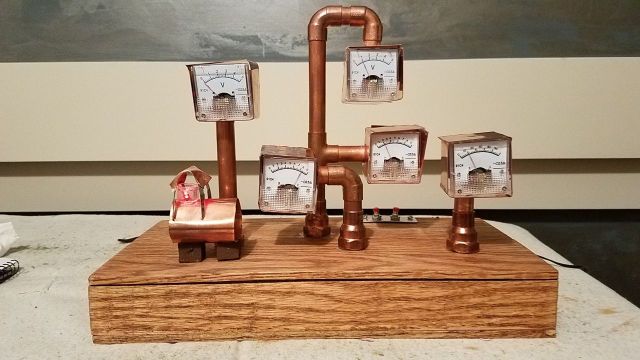